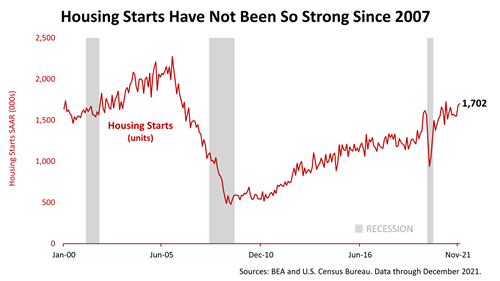 So, before reviewing the performance of stocks and other classes, it’s best to start with a quick look at the latest economic data.

This data was released shortly after the end of the fourth quarter and reflects what was happening in the real economy.

Housing starts unexpectedly rose sharply in December, according to the Census Bureau.

The U.S. requires about 1.6 million new homes to be constructed annually to keep up with population growth.

To be clear, housing growth is more robust than it has been in many years.

Housing is an important fundamental because it touches so many parts of the economy, including retail sales of what we buy at Home Depot and Amazon, as well as construction materials and labor. 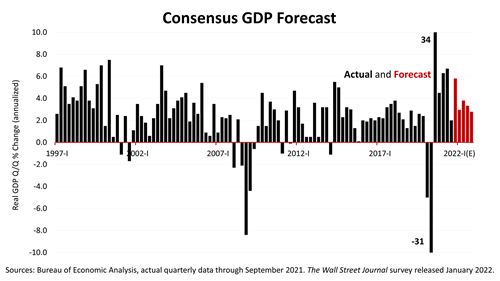 Meanwhile, the newest forecast for the growth of the economy in 2022 also came in strong.

The growth in gross domestic product for the fourth quarter of 2021, which will be reported at the end of January, is expected to come in at 5.8%.

The economists expect a growth rate for each of the following four quarters of 2022 of slightly more than 3%.

That’s much higher than the 2.2% long-term U.S. growth rate expected by the non-partisan Congressional Budget Office. 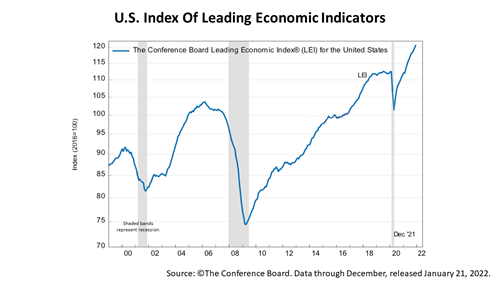 The U.S. Index of Leading Economic Indicators, a forward-looking measure, rose +0.8% in December.

It has soared for months since April 2020, when the recovery from the pandemic began.

The significance of the LEI is that it has historically rolled over before every recession in modern U.S. history, except for the COVID-19 recession.

Nothing like that is happening now, as the index is reaching new heights and economic signals point to above-average growth in the months ahead.

The forecast for growth from the economics team at The Conference Board, a big-business association that collects data monthly on the 10 component indexes of the LEI, is for a +3.5% growth rate in 2022! 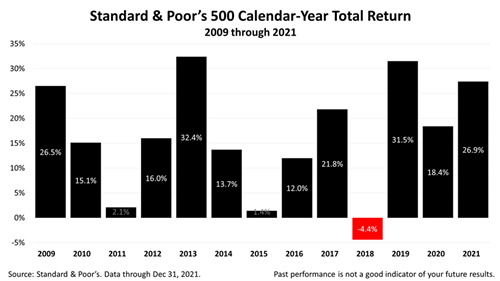 It was the third year of extraordinary gains for the stock market, and the second marred by the pandemic. ​

The calendar-year returns on stocks since the end of the Great Recession in March 2009 have been spectacular.

Interest rates are at their lowest point in U.S. history. Federal Reserve policy on inflation recently changed, and it is causing new financial fears. Tax policy is in the throes of major changes affecting high-income and high-net-worth Americans. ​

Who could have predicted it?

Who could have predicted that, despite the second year of a pandemic, stocks would soar for a third straight year and rack up nearly three times their annual average return? 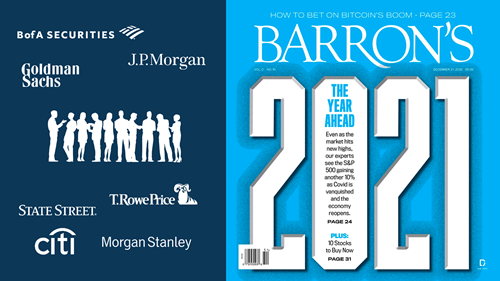 2021 marked another year in which Wall Street’s biggest firms and their best strategists failed to predict the stock market.

On December 21, 2020, Barron’s published an article in which the venerable financial magazine asked 10 leading Wall Street strategists to predict the closing price of the S&P 500 on December 31, 2021. 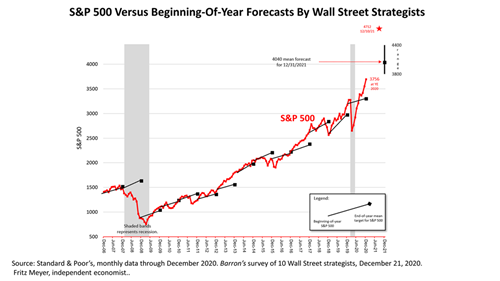 In this chart, compiled by independent economist Fritz Meyer, each black line represents the consensus forecast of the 10 strategists published in Barron’s every December since 2008. 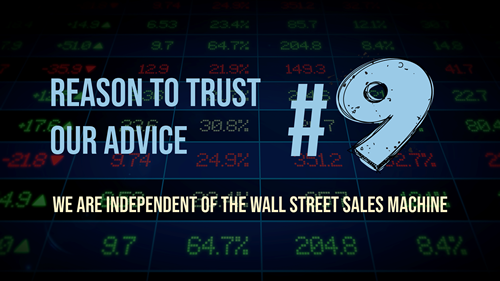 If Wall Street strategists’ forecasts had been correct, the dots would all fall right on the red line representing the S&P 500, but their predictions were often way out of line with what occurred in the market!

Although Wall Street strategists’ forecasts have been consistently unreliable since 2008, their predictions for 2021 were so far off!

Which should serve as a reminder of how the largest brokerages, with help from the financial press, can steer investors in a bad direction.

It’s reason No. 9 to trust our advice: We are independent of the Wall Street sales machine. 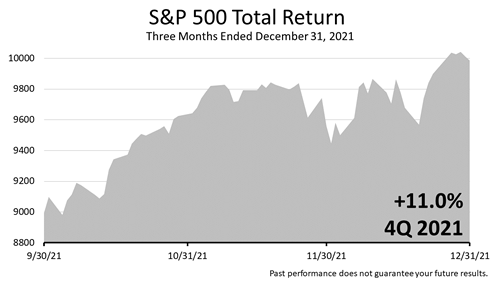 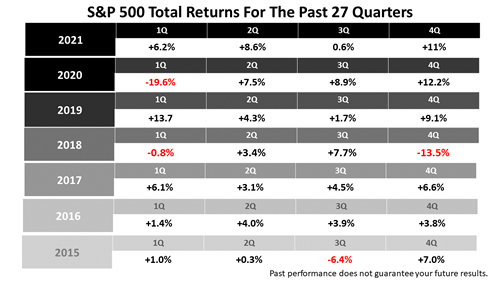 The stock market since 1926 has averaged slightly more than a +10% annual return, averaging a return of about +2.5% per quarter.

This table shows the returns in each of the last 28 quarterly periods, seven years.

To be clear, two-thirds of the past 28 calendar quarters showed above-average returns.

Keep in mind, this period includes a double-digit correction in the fourth quarter of 2018 and the COVID bear market plunge in the first quarter of 2020. 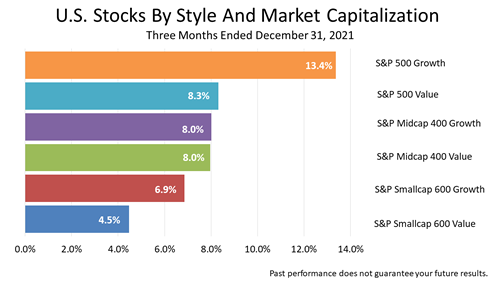 Large-cap growth stocks led the market, as shown in this chart.

It was the third quarter in a row in which large-company growth stocks led the six categories of U.S. equities. 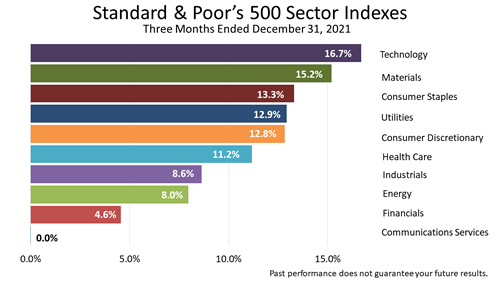 Nine of the 10 industry sectors in the Standard & Poor’s 500 stock index showed a positive return in the three months ended December 31, 2021. Communications services was flat for the quarter. 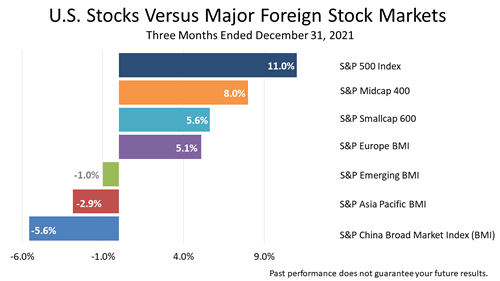 The U.S. led foreign regional stock market indexes in the three months ended December 31, 2021, with Europe gaining about half as much as the U.S. and a slowdown in China’s economic growth depressing stocks in emerging markets and Asia Pacific as well as China. 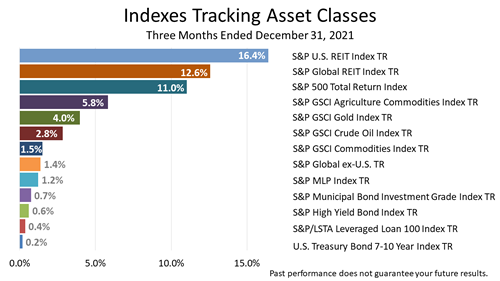 Of this broad array of 13 asset classes represented by securities indexes, only real estate related indexes topped the strong return on the S&P 500 stock index for the three-month period ended December 31, 2021. 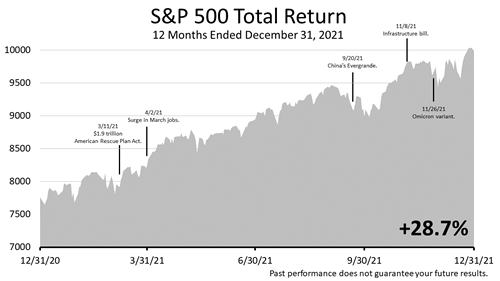 With dividends reinvested, the total return in 2021 was an astounding +28.7%. 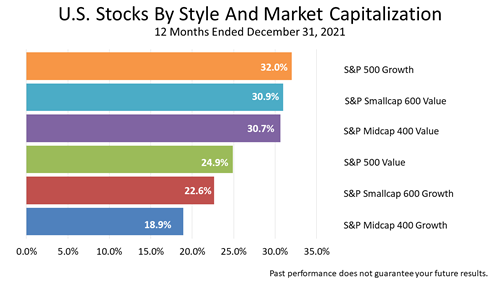 The hot economy in 2021—fueled by government aid during the pandemic and the lowest interest rates in U.S. history—drove stocks higher for much of the year. Economic expansions make growth companies grow even faster, which is why the S&P 500 growth stock index returned 32% in 2021 versus the 24.9% total return of the S&P 500 value stock index.

Keep in mind, the average annual return on U.S. stocks since 1926 is 10%. Also keep in mind that stocks are only one asset class in a diversified portfolio. Stocks are indeed the most important asset class in most portfolios because they are publicly traded. Unlike real estate, partnerships, hedge funds, and other direct investments, you can sell all your stocks on any normal business day. Making the comparison between S&P 500 performance and your portfolio return is apples and oranges. 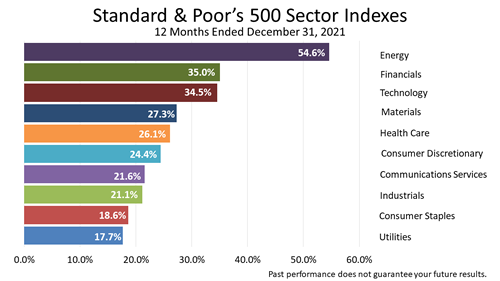 A rebound in oil and gas prices fueled a +54.6% total return in the Standard & Poor’s Energy stock index.

Predicting next year’s one-year leading sector is pretty much impossible to do with much reliability. 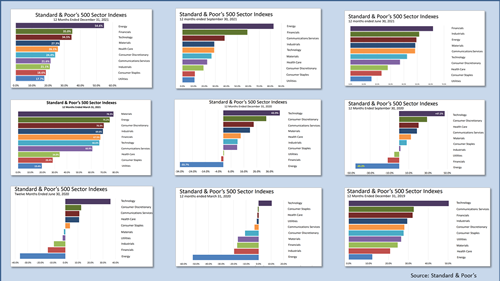 The 12-month industry sector returns for the nine past quarters shown here illustrate why it is so difficult to predict markets.

This is important evidence of how unpredictable the future of markets is. Going through this bit of history may help you stay focused on a strategic investment plan.

The 12-month returns on the 11 industry sectors that comprise the S&P 500—America’s most valuable 500 publicly investable companies—for these six quarters tell a story about how unpredictable stock market investing can be.

Point is, after suffering 12-month losses in four consecutive quarters, could anyone have predicted financials would be a consistent top performer?

If anyone could do that, would they need to manage your money?

Instead of chasing dreams, please consider the strategy we use—modern portfolio theory—as a framework for portfolio management. 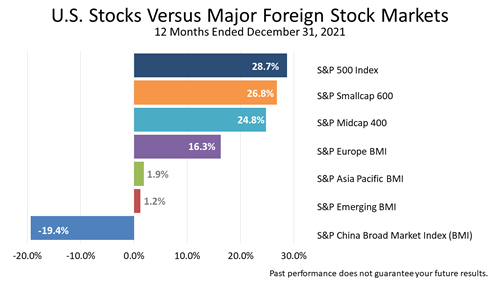 For the 12 months ended December 31, 2021, the U.S. led foreign regional stock market indexes with +28.7%. European stocks, as measured by the S&P Europe Broad Market Index, gained +16.3%. A slowdown in China’s economic growth depressed stocks in emerging markets and Asia Pacific as well as in China. 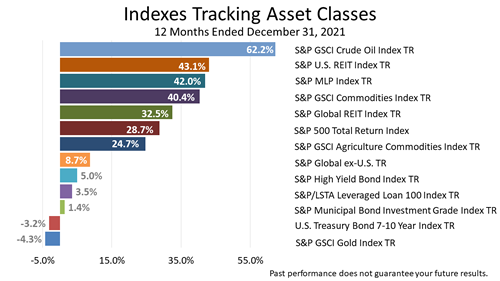 In 2020, oil was the worst of the 13 asset classes represented by indexes in this chart. It suffered a -60.4% loss! The pandemic squelched demand for oil.

In 2021, that changed dramatically. The world economy began returning to normal, and demand rose much faster than the supply of oil.

Capital gain producing assets, such as real estate and growth stocks, which tend to rise in value in periods of economic expansion, showed strong appreciation.

Bonds in 2021 suffered a loss of -3.2% as easy monetary policies of the Federal Reserve continued and rates remained at their lowest levels in U.S. history. With the Fed expected to begin raising rates, and inflation looming larger, the outlook for bonds worsened. 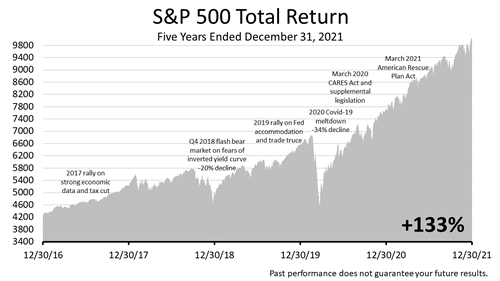 After trading sideways for approximately two years in 2015 and most of 2016—and hitting two air pockets along the way—the stock market broke out after the November 2016 election. It rose steadily to an all-time peak on September 20, 2018, and then nosedived by -20% on fears that an inverted yield curve was imminent.

On January 4, 2019, the Fed signaled rates were on hold, whereupon stocks rallied for most of the remainder of 2019. Stocks rallied and hit a new all-time peak In February 2020. Then the COVID-19 virus threw the economy and stock market into a meltdown. Government action to add liquidity to the economy through aid payments brought about a swift turnaround that began in late March. By early September 2020, following the enactment of the CARES Act and related legislation, stocks hit a record all-time high.

After a pause, stocks rallied steadily from the November 2020 election through year-end. The S&P 500 continued upward through the first quarter of 2021. The March 2021 enactment of the $1.9 trillion American Rescue Plan Act extended the rally, which continued through the end of 2021 despite the Omicron COVID variant.

Over the last five years, including dividends, the S&P 500 total return index has gained +133%. 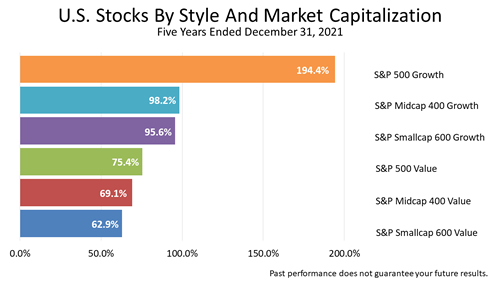 Trillions of federal government aid payments in the form of checks to individuals and businesses, as well as increases in unemployment insurance checks, kept consumer spending strong, elevated savings accounts, and created a flood of demand for buying goods.

With the lowest rates in U.S. history and negative after-inflation bond yields, the outlook for stocks was more attractive. As a result, investors bid up stock price values. 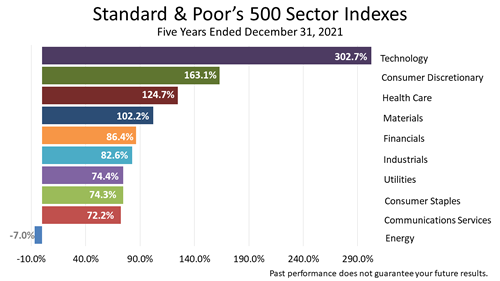 Technology stocks benefited the most from the pandemic-stricken economy over the five years ended December 31, 2021.

Stocks like Facebook, Amazon, Apple, Netflix, and Google gained by far the most from the stay-at-home COVID economy. 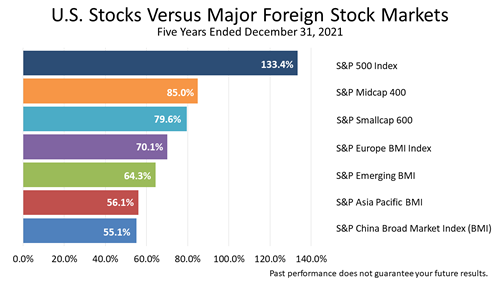 In the five years ended December 31, 2021, though the world was ravaged by the COVID pandemic, the Standard & Poor’s 500 stock index, including reinvestment of dividends, showed a total return of +133.4%. 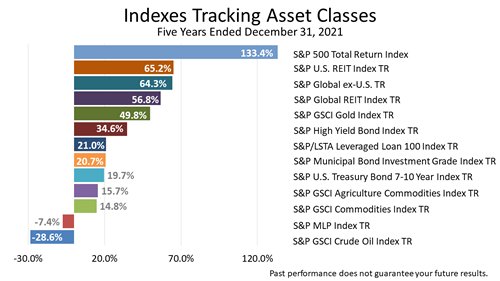 Of the 13 asset classes represented by indexes in this chart, oil was the biggest loser.

Master limited partnerships, which are heavily weighted in the energy sector, was second-worst, with a -7.4% loss in value over the five years.

But the main takeaway from this chart is the outstanding performance of the broad stock market.

The S&P 500 Total Return was more than double the return of the No. 2 performing asset of this diverse group of securities indexes. 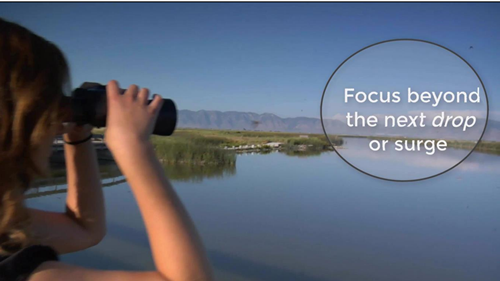 With the stock market offering such strong returns over the last two years, a change in sentiment could cause a correction.

A drop in stock prices of 10%, or even more, could occur anytime.

That’s why stocks are risky. Investors put their money at risk because stocks throughout history have paid a premium over a risk-free asset.

So, investors should always be braced for a drop in stocks of 10% or more.

But—and this is a big "but"—there is no evidence that a recession is on the way and, thus, the chance of a bear market stock market drop of 20%, or like the 33.9% plunge when COVID hit and sent stocks tumbling from February 5 through March 23, 2020.

While risk and uncertainty are always possible, economic data has been stronger than expected for many months, and consumers are in the best shape in years.

Even though stocks could correct, better-than-expected profit growth could propel stocks higher still in 2022.

So, don’t be distracted by near-term uncertainty, and try to stay focused on what’s beyond the next crisis, drop, or surge. 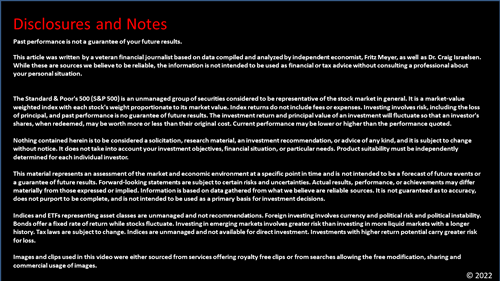